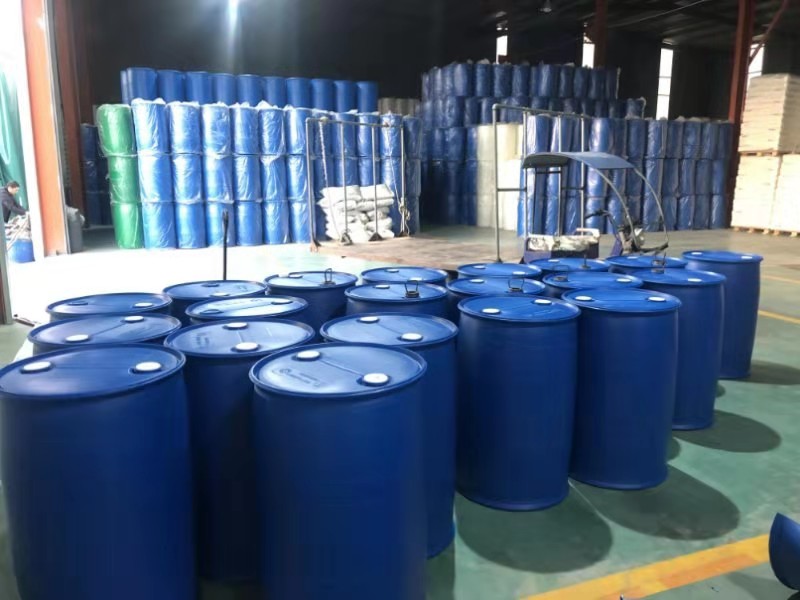 According to the volume of hollow blow molding products: generally 15 liters or less is called micro, 20-50 liters are called small, 100-160 liters are medium-sized plastic barrels, and 200 liters or more can be collectively called large hollow containers. If it is divided into small mouth and wide mouth according to the sealing diameter: in practical applications, 30 liters are generally used as the boundary, and most of the small diameter barrels below 30 liters are commonly called closed barrels, which are sealed in the form of external thread + inner cover + outer cover , Mostly used for packaging dangerous liquids; plastic barrels with a capacity of 30-160 liters are mostly widely known as open barrels, which use raised sealing ribs at the mouth of the barrel + rubber sealing strips + tight outer lids. 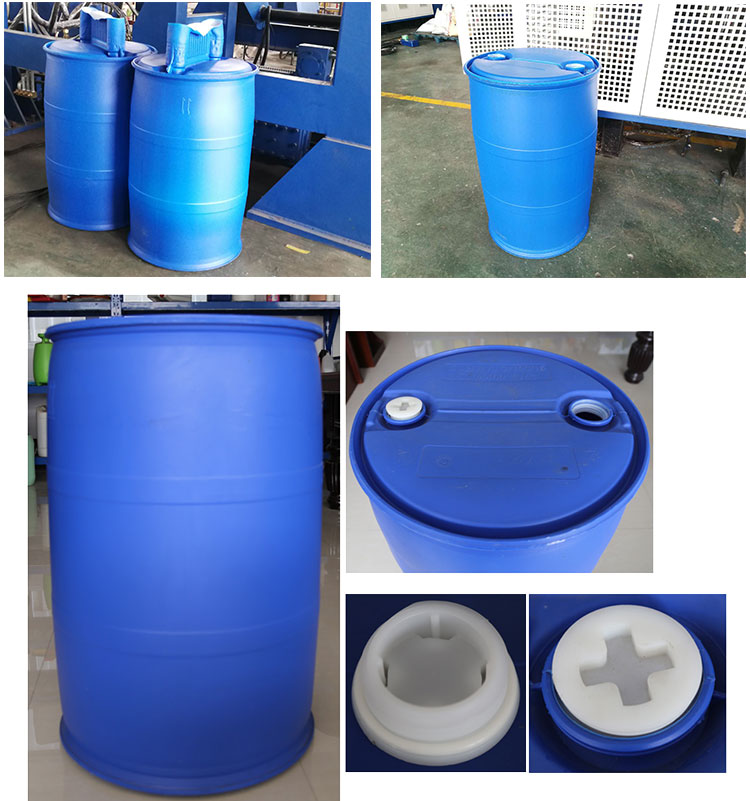 Analyze the different classifications of the above hollow blow molding barrels: it can be said that plastic barrels of more than 200 liters are the most technically content, the lowest filling and transportation cost, and the widest application range of plastic packaging containers among large-dose dangerous liquid packaging containers. .

Let us now discuss the advantages and disadvantages of various types of plastic packaging containers of 200 liters and above on the market and their development directions. At present, the more mature products on the market mainly include the following categories: 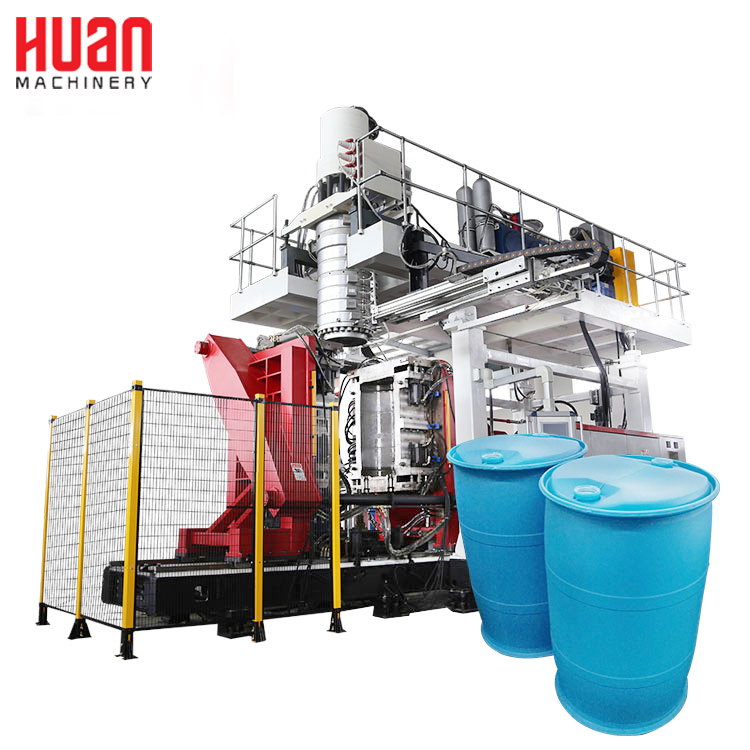 200 liter double "L" ring low-surface bucket, referred to as 200-liter double-ring bucket or 200 liter conventional plastic bucket. Because of its overall design, the upper and lower bottom surfaces and the barrel are formed into an integral L-shaped protruding ring, and it is named because the height of the barrel surface is lower than the barrel mouth and the upper "L" ring. This type of packaging barrel can meet the packaging requirements of the United Nations UN standards for Class I hazardous liquids. It not only has the characteristics of reasonable structural design and strong barrel, but also can be hoisted (or forklifted), stacked, and rolled like steel barrels. Storage and stacking, so it is the most widely used and most convenient type of product among the large-scale liquid dangerous goods packaging containers at home and abroad. The 200L double "L" plastic barrel is a packaging container developed in the chemical packaging industry with the growth of polymer resin materials. It is made of high-density polyethylene (HMWHDPE) with an average molecular weight of about 300,000. It is blown by the extrusion blow molding hollow molding machine, and can be used for the filling of various liquid (viscous) corrosive chemical products such as acids, alkalis, and lipids. Because of its excellent corrosion resistance, high strength, several times the turnover times of steel drums, and easy recycling, it is highly valued by the domestic and foreign shipping industry, and because it can fully meet the "International Maritime Transport of Dangerous Goods Law" The requirements of the relevant dangerous goods packaging containers in China have been more and more widely used in the transportation of dangerous goods. 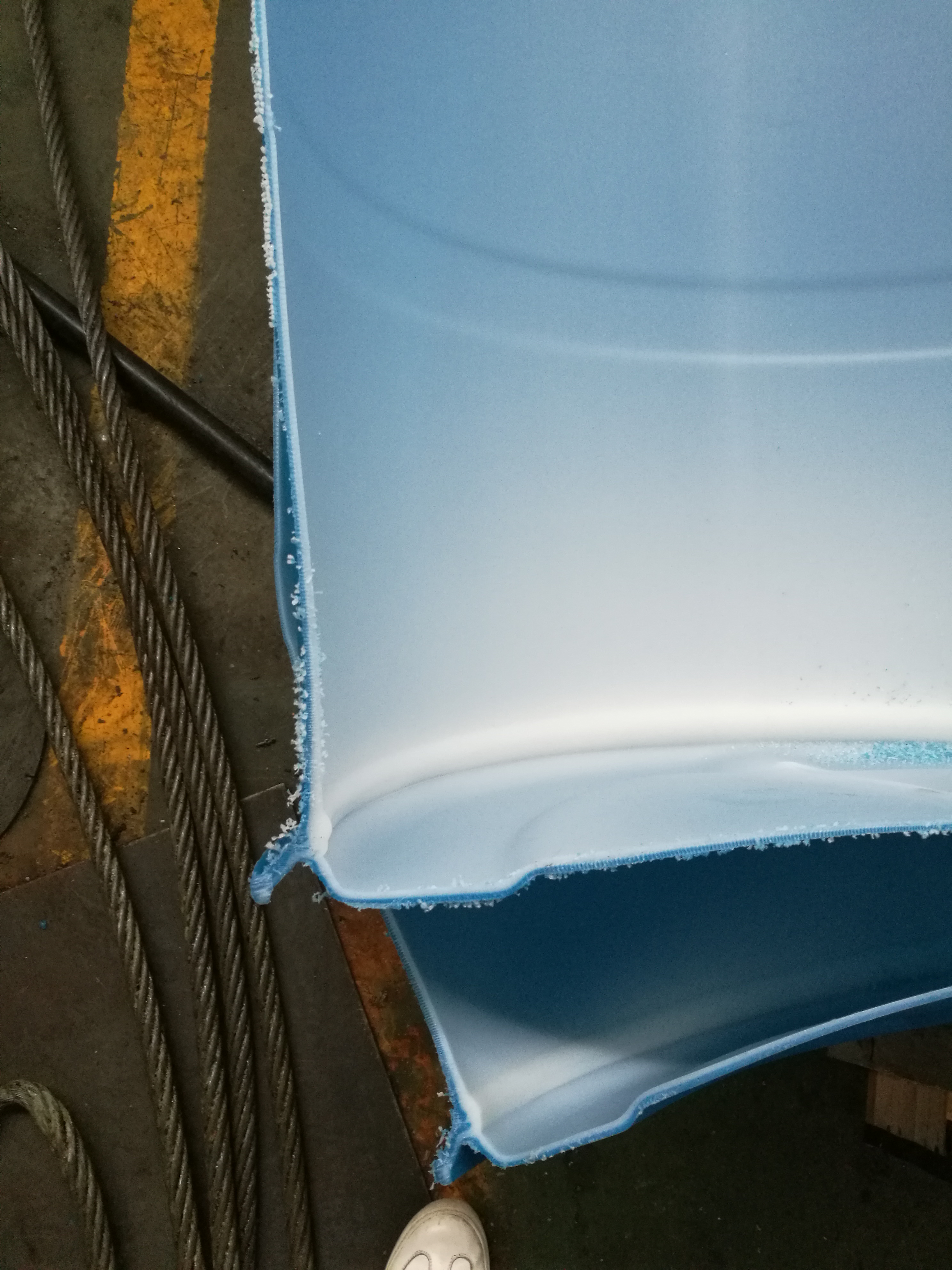 Except for several foreign brands such as Germany and Taiwan, among domestic brands, HUAN MACHINERY is currently the domestic hollow machine manufacturer with the strongest R&D strength and the most sophisticated machinery manufacturing capabilities. It has a number of patented technologies in plastic machinery. Its mainstream product hollow machine is mainly used to produce 200L double "L" ring barrels. It has high reliability and production efficiency. The quality of the products produced can meet the requirements of various dangerous goods packaging. , Compared with the existing various brand products on the market, it has a higher cost performance. It is mainly engaged in the research and development and manufacturing of hollow blow molding machines. The blow molding machine can be used for various hollow plastic products, including automobile fuel tanks, chemical raw material packaging barrels, Pallets, IBC ton barrels, water tanks, etc., in order to challenge the monopoly of foreign high-end plastic machine manufacturers. We also carry out the technical transformation of mechanical and electrical equipment, the trade of plastic raw materials and products, and the import and export of the above-mentioned products.

To sum up, because the double "L" ring plastic barrels have higher requirements for raw materials, mold design and manufacturing, and production process flow during the production process, the production cost and liquid packaging and transportation requirements are considered comprehensively. Based on this, an economical 200-liter single "L" ring product has been developed on the market. That is, the "L" ring on the barrel surface with hoisting (or fork lifting) and stacking functions is retained, and the "L" ring under the barrel is omitted. Although this reduces the stacking performance of some packaging barrels and the handling rigidity of the barrel bottom, it can save the corresponding raw materials and improve the drop impact resistance of the plastic barrels, and reduce the packaging cost of the enterprise. In some low-corrosion and low-risk liquid packaging, it has begun to have a certain range of applications, but because of its own limitations, it currently only accounts for a small part of the market demand. 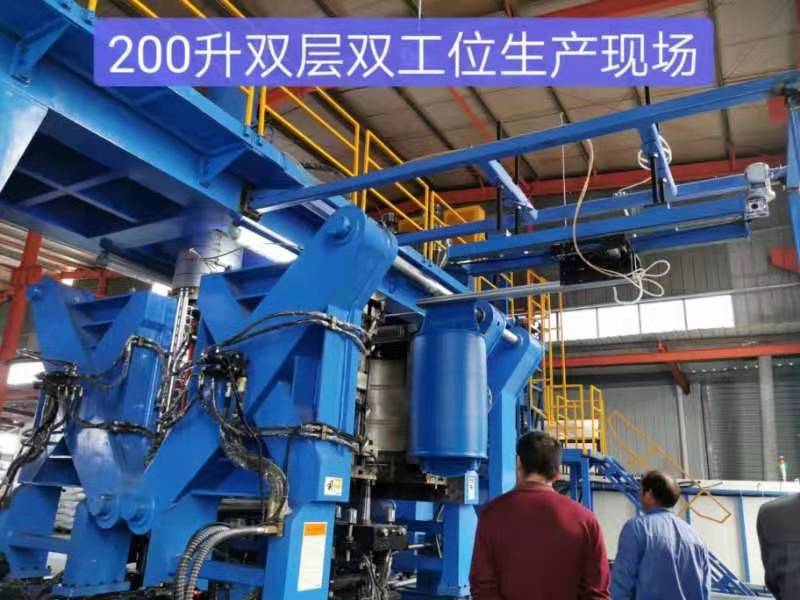 To analyze the structure of a 200L plastic bucket from a geometric point of view, the 200L plastic bucket we look at from the front is equivalent to a cylinder with a height of 90cm and a diameter of about 60cm. The upper and lower surfaces of the plastic barrel can be roughly regarded as the upper and lower cross-sections of the cylinder, and the vertical surface of the barrel is regarded as the length of the cylinder. In this way, the upper and lower surfaces of the plastic barrel can be viewed from the perspective of solid geometry. Each joining point of the lower two sides on the circumference of a circle with a diameter of 60 cm and the barrel body is an approximate 90° right-angle contact point. Naturally, when we conduct a horizontal drop experiment on the plastic bucket, the two approximately 90° right-angle contact points of the plastic bucket naturally become the weakest point of impact. In the actual test, almost 90% of the plastic bucket is damaged. It happened at these two points. According to the forming principle of the upper and lower "L" rings introduced in the previous section of this article, although we designed the protection of the "R" ring structure at the corners of the barrel, we also made the most limit in the shape of the mold. Arc transition protection, for example: the arc of the barrel bottom can be extended downward to a relatively large extent to increase the arc transition length at the “R” ring at the bottom of the barrel, so that the 90° turning point can leave the “R” at the maximum distance The position of the ring can better disperse the impact force of the plastic barrel when it is dropped laterally and increase the fastness; however, due to the limitation of the height of the "L" ring on the barrel surface, the height of the barrel surface can never exceed the barrel mouth when designing the mold. And the height of the upper "L" ring, because too high will hinder the stability of the upper layer of barrels when stacking upright, and secondly, it is easy to cause waste water to overflow at the barrel mouth and pollute the filled products when the water is flooded for a long time. Therefore, the impact strength of the "L" ring on the surface of the conventional 200-liter plastic barrel is weaker than that of the "L" at the bottom of the barrel. Based on the author's own experience, the damage probability of the barrel surface roughly accounts for the total amount of damage in the test. About 60-70% of it.

Based on the above analysis, it can be seen that the conventional 200-liter double "L" ring plastic barrel has become a 200-liter plastic barrel because it takes into account the various properties of plastic barrels such as hoisting (or fork lifting), stacking, rolling, dropping, storage and stacking. Among a large class of hollow plastic containers, the product with the widest application range and the most convenient use is also the one with the highest technical content. Regardless of whether it is his economical type: 200 liters low-side single "L" ring plastic barrel, or his derivative: 200 liters single and double "L" ring high-surface plastic barrels, they are in the current market due to the inherent defects of their respective structures. It has never been able to achieve large-scale applications. 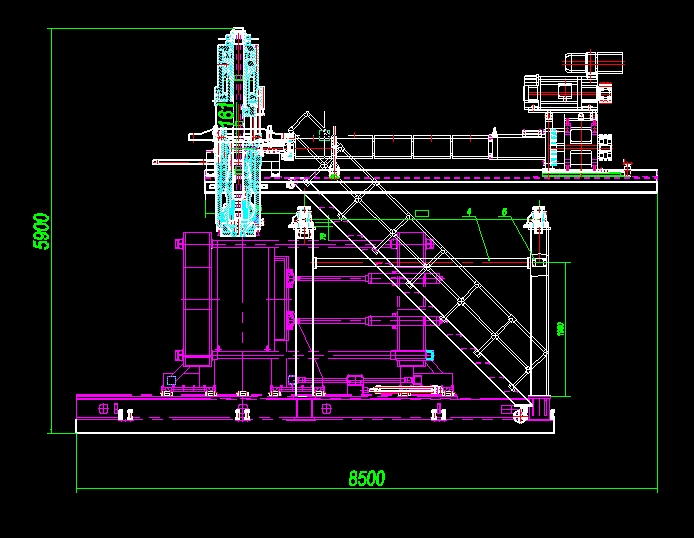 This type of plastic barrel is a hollow plastic barrel packaging form specially developed for food-grade liquid packaging. Its appearance specifications are almost exactly the same as those of a 200-liter conventional barrel. The biggest difference between them is that the walls of the plastic barrels all have a composite structure of two layers inside and outside. The outer layer is a protective layer added with a colored masterbatch, which is generally dark (blue), which can resist ultraviolet rays and sunlight. Ageing. The inner layer is a brand-new food-grade high-density polyethylene raw material, and no other additives are used in the production process, which can ensure the purity of the contents to be safer to use, and can meet the canning requirements of various food-grade liquids.

At present, HUAN MACHINERY, a domestic equipment supplier, has successfully developed a multi-layer hollow machine that can meet the above requirements, and has sold many equipment to various regions in the country, and has achieved a very high market evaluation. The two extruders of this equipment adopt high-speed extruders imported from Germany, with high efficiency and low energy consumption. Two-layer continuous co-extrusion die head, spiral flow channel structure, no welding marks; the machine head adopts electromagnetic induction heating ring, which can save energy and electricity by more than 50%; provide round barrel mouth and mandrel, suitable for the production of round chemical barrels, oval Die: easy to shape, less flash, suitable for blow molding tray production.

HUAN gathers many scientists, experts and technicians at home and abroad to form a high-tech product research and development team. The company's newly developed multi-layer (three-layer) blow molding equipment has obtained a national patent. At the beginning of the new product development, it was clear that energy saving, environmental protection, high efficiency, and stability were the research and development directions. The main innovation in the direction of energy saving is the conversion of AC motor drive system to servo motor drive system, and the conversion of resistance heating system to electromagnetic induction heating system. Because these two systems are the most important energy sources for hollow blow molding machines, HUAN MACHINERY has grasped the key After successfully upgrading the servo drive system, Dianzha overcomes the electromagnetic radiation problem of the electromagnetic induction heating system. It is the first to obtain the CE certification in China, which makes the electromagnetic induction heating system smoothly equipped with the hollow blow molding machine and lays a safe foundation.

1) The middle layer of the three-layer hollow container is made of recycled plastic, that is, 50%-70% of the entire product can be made of low-priced recycled plastic. The price is half or even lower than that of the new material. The inner and outer layers use 15 % to 25% of new materials, which not only guarantees the quality of products but also closes the residual pollution sources of recycled materials, which greatly saves the raw material cost of equipment users;

2) A large amount of digestion and recycling of plastics can save a lot of energy and greatly reduce environmental pollution caused by recycled materials. It is in line with many policies on low-carbon, environmental protection, and resource reuse around the world. Users can enjoy many preferential policies from various countries and local government departments;

3) Our three-layer blow molding machine uses servo motor drive and electromagnetic induction heating, which can save users more than 50% of energy consumption in the production process.